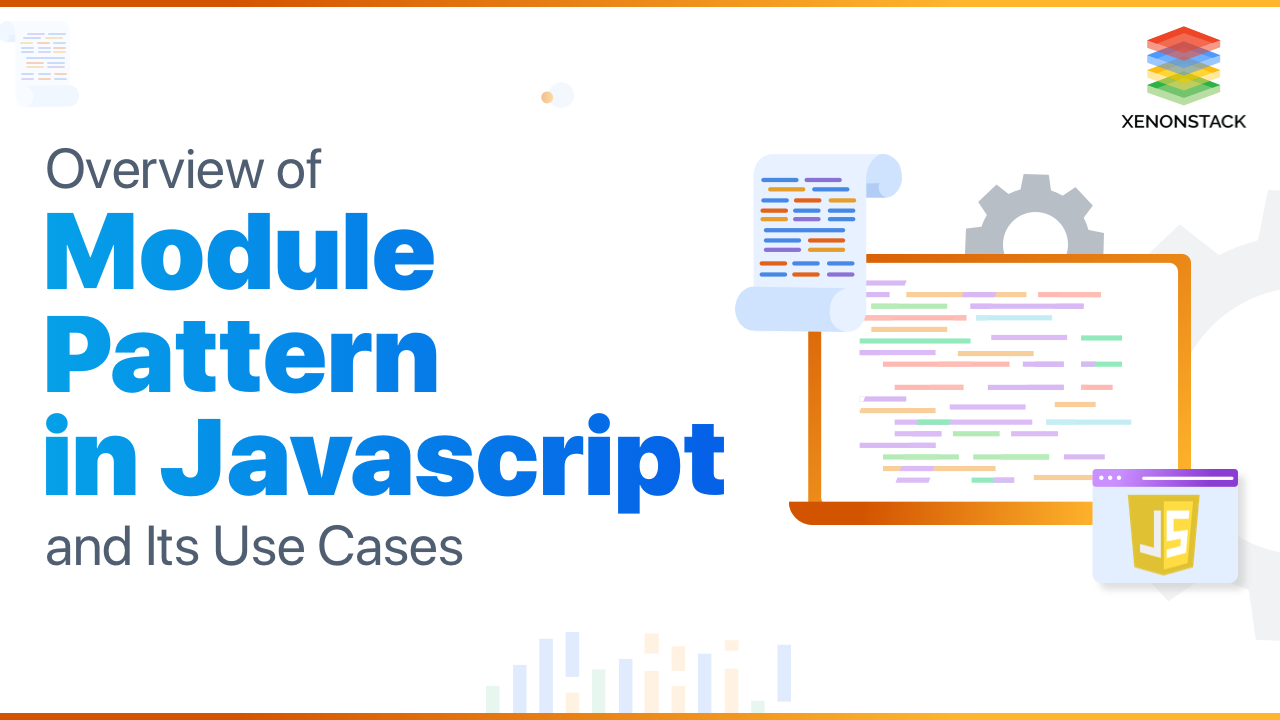 Introduction to Module pattern in Javascript

Also, Javascript can be used both as a client-side and server-side scripting language. So as we have seen, Javascript is one of the most powerful programming languages, so it is necessary to write maintainable and scalable code in Javascript. To achieve this scalability, we use several design patterns, and here we will explore one design pattern called module pattern.

A programming paradigm in which programs are constructed entirely of pure functions, with no shared mutable state or side effects. Click to explore about, Functional Programming in JavaScript

What is Module Pattern?

The module pattern is a special Design pattern in which we use IFFI (Immediately invoked function expression), and we return an object. Inside of that object, we can have functions as well as variables.

And that functions can be used further with the Html elements, and with this Module pattern, we can achieve encapsulation where we can create an abstraction between our real functions and the functions used with Html elements.

Why do we use Module Pattern?

We can write a piece of code in various ways in Javascript. But what if we have to fix some bugs or change some code functionality after the code is written. If a developer has written a piece of code and that code is not scalable, he will be confused after some time about what is going on with this piece of code.

Or in general, we can say that different developers have different minds and approaches to writing code. Hence, it is very difficult for different developers to read others' code, understand it, and then make changes. So to fill this gap, some design patterns are introduced. One of them is the Module pattern.

Here written some pieces of code in Javascript:-

Although we can use this piece of code to increase students' marks anywhere in our file, here the scalability is not there if I try to find this code on my script or say after some time I would like to change some functionality in this so it would be a challenging task. So to overcome this problem, we will use the Module pattern.

What are the other patterns we have in Javascript?

All the patterns we have in Javascript are listed below:

Since we know that constructor is a function that initializes whenever we make an object, in Javascript There is three ways to make an object.

So here, we need an abstraction layer of an object which can differentiate two objects, one which calls that api and one which knows when to call that api service.

A facade pattern is used to create an abstraction layer between what is shown publicly and what is behind the curtains. This is something similar to the Module pattern.

Functional programming is a significant paradigm shift in the software world over the past 10 years. Click to explore about, Reducing Maintenance Costs With Functional Programming

Comparison between Module patterns with others?

In module pattern, we have a specific pattern where we have a function that calls itself whenever the page loads. And that function returns an object, and it is a type of abstraction of properties and methods inside that function. We can use this method to bring encapsulation into our code. If we see other design patterns there, no such abstraction concept is used, or this type of pattern is performed. So in this way, the Module pattern is different from other patterns.

There can be several differences between module patterns and others.

Use Case of Module Pattern

Before discussing the use case of the Module pattern, let us discuss some prerequisites of the module pattern. They are:-

IFFI is a function that automatically invokes whenever our script executes. It is a very effective way or alternative to using a window.onload function.

The second prerequisite to the module pattern is object literals. Object literals is the main part of oops through which we can implement and use the real world. The entity in the programming world. For example, we have a car with some color, size, price, name, etc. So with the help of object literal, we can express this real-world entity into a virtual one in our program. Let us see how this is implemented in our javascript program.

Use Case of Module Pattern

Let us consider an Html code where we have to achieve a functionality where we click a paragraph and color change on hover through Javascript. Now here we want to achieve color functionality in paragraphs, on hover. So we will achieve it with javascript using module pattern.

Our solutions cater to diverse industries with a focus on serving ever-changing marketing needs. Click here for our Digital Product Development and Engineering Services

We can use any design pattern whatever we want, but if we are considering data abstraction and encapsulation paradigm, we should use the Module Design pattern. Module Design pattern uses IFFI (Immediately invoked function expression) to create a data abstraction layer. It only allows those properties and methods to use which are returned by the IFFI function expression. Hence data becomes more secure in the front end. Also, asymmetry in code is created to manage the code more efficiently if other developers are working on the same piece of code.